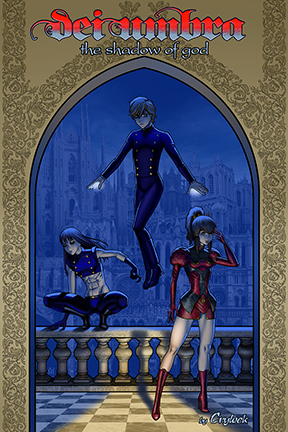 16-year-old Layne is drawn into an alternate reality where a tyrannical Church rules the country, and inquisitors enforce morality. Also there's dinosaurs. Completed 6/6/20 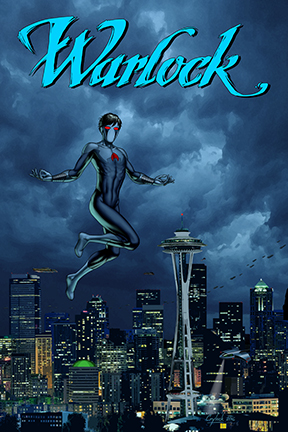 Meric's just an ordinary guy. He never wanted to be an ultrahero. But now suddenly he has ultra-powers, deadly ultracriminals want him dead, and it seems like everyone has plans for him... Updated 6/4/2021

This is the story of an exceptional ultrahero who calls herself Girl 7, as told by an unlikely source... an ultravillain called The Prowler. Updated 7/31/2021 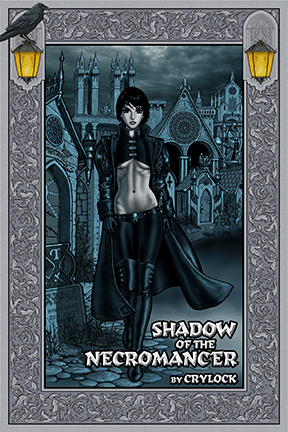 Shadow of the Necromancer

A young coed inexplicably wakes up in a dank subterranean crypt, in a zombie-infested necropolis... and in the body of an evil necromancer. Updated 8/11/18

Hi! I'm Crylock, and these are my comics.

They are free to read, but keep in mind they are works in progress, and might not have endings yet. I work on them whenever I can, but these things take time, and I'm just one guy.

Welcome to my multiverse!

My comics multiverse, that is. Every superhero comics creator has their own vision of what a world with super-powered people in it would look like. This is mine. Two of my comic stories are set in this world. The biggest difference, I think, is that in my world ninety percent of the people who gain superpowers, or ultra-powers as I like to call them, become outlaws.

See, I believe that power corrupts. I’ve seen it often enough in the real world, and my comics world reflects that. The average person, on discovering he or she has powers, will eventually begin to see themselves as superior to ordinary people. Soon they tend to stop caring about normal folks, and may even begin to despise them. They will decide that laws no longer apply to them, and begin doing and taking whatever they want. They become ultracriminals to one degree or another.

It takes a certain rare personality type to resist this corruption. It takes an even more rare sort of person to take a stand against the corrupt ultracriminal majority and become an ultrahero. So that’s the role of the ultrahero: to counter the tide of ultra-powered criminals who can’t be stopped by ordinary law enforcement, and who would undermine or dominate society if left unchecked.

America is a fragmented country. The federal government has fallen into disarray because the president is a corrupt, narcissistic ultra-fascist with mind-control powers. The White House and the houses of congress are locked in a struggle for power, and have been for years, leaving the rest of the country to fend for themselves. Every city in America has become an autonomous city-state, every town a fiefdom. The corporations manage everything from behind the scenes, maintaining the status quo and providing communication, travel and trade between cities. Corporate-sponsored teams of ultraheroes work to keep ultravillains in check, but are often overwhelmed, and some cities are actually ruled by ultra-powered despots. Emerald City, originally called Seattle, has held its lawless ultras at bay so far, but only barely.

Emerald City is home to both Warlock and Girl 7, two ultra-powered vigilantes. The city’s legitimate ultraheroes belong to established teams, and are funded and supported by corporations. They are celebrated, idolized and extensively covered by the media. The vigilantes are on their own, and though the law allows them to operate and pays them bounties when they take down notorious ultracriminals, the mainstream media mostly pretends they don’t exist. They are unsung heroes, doing a dangerous job with a high mortality rate.

What’s this story about? I wanted to tell an origin story, one that followed a relatable, believable character as he went through the difficult process of becoming a powered, costume-wearing hero. In doing so, I hoped to define, for myself as well as for my readers, what, exactly, a superhuman hero is, and should be.

Meric is a bright young slacker who goes to community college and works part-time at a supermarket. He doesn’t know what he wants to be, has no goals and no drive to achieve success. He is totally unprepared for the onset of ultra-powers. He has no desire to be an ultrahero. He is, in fact, afraid of doing so, for personal reasons.

But Meric’s girlfriend Elise adores vigilante ultraheroes, and runs a popular blog about them. She can’t even imagine Meric having powers and not using them to become an ultrahero. And when he meets Marco, who is apparently a retired ultrahero and who offers to mentor him, it seems destiny is pushing him down a path he is reluctant to tread. Meric becoming Warlock is by no means a foregone conclusion, and how he gets there is a major part of his story.

Fearless: The Story of Girl 7

Girl 7 is also a different take on being superhuman. Unlike Warlock, she is strongly driven to succeed at being an ultrahero. Her powerset, which consists mostly of increased strength, speed and durability, is the most common one there is, but she is obsessed with pushing herself beyond her limitations.

Her story, which is a bit more complicated than it appears, is told by an unlikely source: The Prowler, an ultracriminal with the power to become invisible. When he saves her life one night, she assumes he is an ultrahero, and their unlikely relationship begins. They both have secrets, and the more they learn about each other the more complicated things get, and the more inextricably linked they become. Ultimately they will be partners, but it won’t be easy getting there, and they’ll both go through some changes along the way.

Dei Umbra: The Shadow of God

Dei Umbra is an entirely different kettle of fish. I intended it to be an homage to manga, and drew it in a manga style. It has a number of manga tropes, including teenage heroes with superhuman powers, and even a couple of minor instances of traditional fan service.

Despite the title, it’s fairly lighthearted throughout. But it deals with some dark themes that you might not expect; The tyranny of a Christian theocracy, for instance, with all of the far-right excesses a modern theocracy would have, and some of the other evils that, historically, tend to happen when Christianity gains too much power.

On the lighter side, it’s got super-evolved dinosaurs and cute flying imps. It’s a real epic, and unlike my other comics, it’s actually finished!

The Shadow of the Necromancer

The Shadow of the Necromancer is a bit experimental, and doesn’t fit any common comics genre. It’s pure dark fantasy, and it indulges my love for gothic imagery.

Lisa Willich, a college student, wakes up one morning in the body of an evil necromancer. She finds herself in an ancient, cobweb-festooned crypt, in a sprawling necropolis full of the undead, in an otherworldly gothic city built on the borderland between the realms of the living and the dead. She has no idea where she is or how she got there. She’s going to have to unravel the mystery, and when she does she’ll discover that her new body’s original owner has done something terrible, and she’s the only one who can undo it. So that’ll be fun.

So this is where you are. The images above are the gateways to these worlds, and I hope you'll explore at least one of them. Either way, thanks for visiting my multiverse!